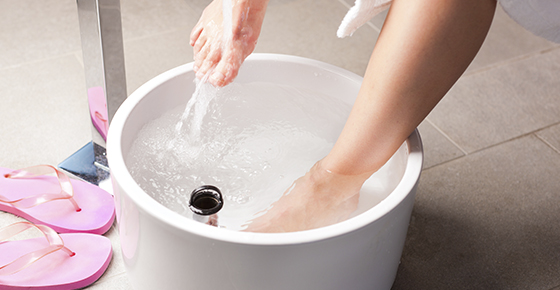 What is an Iodic Detox Foot Bath?

This is a foot spa that instead of relying on bubbles to soothe away your pains and aches after a long day, instead it uses water that has been charged with negative and positive ions (or electrolytes) that are used to draw toxins throughout your body in a process where there is exchange between the ions in the body and the water.

You can also say that it is the exchange of positive and negative ions which result in the change of color of water placed in the ionic foot bath as the color reflects to what cause s the toxins.

Toxins are typically anything that ruins the optimal functioning of the human body. They can be anything ranging from alcohol to unhealthy sweat residue (this is normally caused by stress and not exercise).

Colors Found in an Ionic Chart

There are different colors of water that are known to reflect different affected areas of the body and the type of toxins that are being released.

White foam substance: This is a reflection that toxins are being drawn from your lymphatic system. This comprises of the lymph nodes which are the body’s drainage system. Their main work is to draw toxins from the muscles and other vital organs and also storing them until them until they are released as excretion or sweat.

White particles which look like cheese: This is a reflection that yeast is being drawn from your body. Although yeast occurs naturally in the human body, it can become an infection when excess.

Orange: This is a reflection of the issues either with the joints or the buildup of toxins around them.

Red: This is a reflection that blood clots are being dispersed in the body.

Dark green: This is a reflection of gallbladder problems.

Yellowish green: This is a reflection of the toxins that are being drawn from the kidneys, the urinary tract, the female reproductive system or the prostate gland.

Brown: This is a reflection that toxins in the body are being drawn from the lungs. For instance; atmospheric pollutants or tar from cigarettes.

Black: This is a reflection of liver problems. The toxins which affect the liver include fat from red meat and alcohol.

Black specks: This is a reflection of the presence of toxins from heavy metals that are being drawn by the body.

Most importantly, the process behind a detox bath is completely simple and painless. You’ll place your feet in water containing the right levels of charges and ions as required and then give it some time to work. The foot spa lets you perform the treatment at your own pace while relaxing. You can even use the foot spa at home.

The treatment process is either uncomfortable or painful. A complete session lasts between 20 to 30 minutes and is totally safe. When conducting it for the first time, you’ll become very interested once the water begins changing color. However, don’t become alarm before assessing the results since sometimes there will be nothing much to be concerned about.

There are various health benefits that come with using a foot detox bath. They include:

A lot of studies and investigations have been conducted with regards to the effects of using ionic foot baths. The procedure is popularly known for its effectiveness in cleansing the body from bad toxins. The therapy will leave you feeling energized and rejuvenated.

This site uses Akismet to reduce spam. Learn how your comment data is processed.

Contents1 What is an Aromatherapy Essential Oil Diffuser?2 Who Benefits From Aromatherapy?…

Rinnovimedicalspa.com is a participant in the Amazon Services LLC Associates Program, an affiliate advertising program designed to provide a means for sites to earn advertising fees by advertising and linking to amazon.com. Amazon and the Amazon logo are trademarks of Amazon.com, Inc, or its affiliates.
© Copyright 2019, All Rights Reserved