With the many uses and benefits of Himalayan Salt blocks, you should probably add it to your next shopping list because the Himalayan Salt tile can be used for cooking. If you use the tiles to cook at your dinner parties expect people to ask you several questions and the most common one will be, “Why did you decide to cook on a salt tile?”

There will also be a lot of amusing comments such as why you just can’t cook the food using the normal way and then later lick the salt lump or even why you wouldn’t sprinkle some salt on a pan and then cook on it. This article will help your friends and other guest understand the importance of using a Himalayan Salt Tile to cook.

10 Things to Do with Himalayan Salt Tiles

The following are some of the uses of a Himalayan Salt Tile in the kitchen.

#1: It takes the taste of food to another level

When you use a Himalayan salt block to cook your food, it will be imparted with unique flavors and tastes which cannot be brought about when using ordinary table salt. Let’s compare Himalayan salt to water for better understanding: bottled water is refreshing and delicious the way it is. However, if you drink the water fresh and cold directly from a mineral spring, you will be able to tell the difference immediately.

Cooking with a Himalayan salt block is basically the same thing. Mark Bitterman, the author of Salt Block Cooking book explains it as a technically superior cooking method. He says, “With duck breast or bacon, it produces extra texture of crispy, fatty duck skin or bacon that is better that anything you’ve tasted before. Scallops – it is just the most remarkable crispy golden crunchy browning of a scallop”

Bet you’re getting hungry by now! Himalayan salt blocks are ideal to be used for foods that become ready fast. For seafood you can cook shrimp and salmon. For vegetables you can cook caramelized onions, asparagus, zucchini and potatoes. And lastly, you’ll get really good steaks by cooking them on a salt block just sprinkle some salt and cracked pepper and place it on the grill.

Here is a video that will help you learn how to cook your steak on a Himalayan salt tile. If you want to learn how to do it properly, make sure you start watching the video from the beginning. But if you’d only like to watch the steak cooking through, watch it the way it is.

#3: You can grill your food indoors

As we’ve mentioned cooking steaks. The best part being you can grill yours right from the comfort of your kitchen. All you’ll need is to know how to cook it so that it is properly done. This is comes in handy during rainy days and winter season.

In the video shared above, the man is grilling his steak outdoors. However, you can also do the cooking using a gas flame as well and this is an ideal method because you get to control your source of heat. 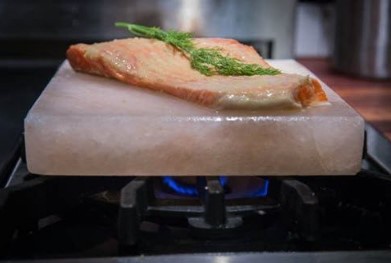 So, if you have one of the best infrared gas grills at home, try using Himalayan salt when cooking your next steak.

Surprising, right! Who knew this was even possible? But some cookbooks suggest this and you’ll be impressed at how well done your chocolate cookies come out a bit salty. You obviously cannot bake a lot of cookies on a salt tile. The most dough you can put will bake about 4-6 cookies depending on how big you want them.

In addition, if you’re a mom and you’d like to stun your fellow soccer moms or your mother-in-law, sharing your cookies with them while still hot on your salt tile will have them joining you soon. 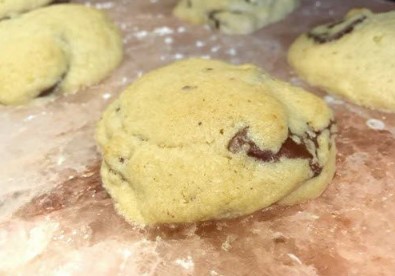 Of course, make sure you are using a good loaf pan to bake your cookies.

Unlike the other cooking appliances, Himalayan salt block don’t lose heat very fast. They are good at holding temperature for long durations. Just make sure that the food doesn’t have a lot of moisture. This is because if the food has a lot of moist, it will spread all over the salt tile and as a result it will become very salty. For instance, don’t cook fried eggs on the salt block because they are very moist and spread widely.

#6: You Can Serve Cheese and Cold Cuts on it

The same way Himalayan salt tiles are good at keeping heat, they can also retain cold temperatures. This is good for dishes such as cheese, fruits and cold cuts. Again, the trick behind this is to not spread the food out on the block. For instance, if you have watermelon, lay it out in a fan style in such a way that some of the pieces are not touching the tile.

It will be best for you to have 2 salt blocks. You can use one for chilling and the other for cooking. One of the top choices for the best Himalayan salt tiles comes as two blocks.

#7: You Can Put Raw Foods like Sashimi on Your Salt Tile

If you’re the kind of person who becomes excited at the sight of sashimi on your table, you’ll become even more excited to watch the raw fish getting cut on a salt tile. Don’t forget the heavenly taste you’ll get from oysters made on a Himalayan salt tile.

#8: You Can Make Ice Cream with it

As we mentioned before, Himalayan salt tiles are great at holding different temperatures and with such they can be used to chilling different types of foods. If you whip up ice cream flavors that would go well with that hint of saltiness of the tiles, I bet you will get yourself some delicious ice cream.

#9: You Get and Addition of Healthy Minerals on Your Food

If a simple gesture like leaving your Himalayan salt lamp on offers some health benefits, imagine the kind of healthy benefits you’ll get from placing or cooking food on it. Apart from iron, you’re also getting sodium chloride, potassium, magnesium, phosphorous, calcium, iodine and several other micro-traces of minerals.

You will benefit from improved digestion, having a balanced pH and better levels of hydration. Using a Himalayan salt tile is also good for people suffering from acid reflux.

A Himalayan salt block isn’t just meant for cooking, it can literally be used as a serving plate or tray. Just load it up with some cheese, sashimi, fruit or ice cream and serve them to your guests during a party. Almost everyone will be asking you about mysterious but beautiful luminous crystal block that is sitting on top of the dinner table.

First time users tend to find cooking using a Himalayan salt block intimidating but once you get the grasp behind it, you’ll pretty much be sailing from there. If you’re that type of person who enjoys their food, trying out new stuff and eating healthy, try out theses salt tiles. You can check out the most popular picks of really great Himalayan salt blocks.

This site uses Akismet to reduce spam. Learn how your comment data is processed.